In his youth as a student at JJ Hospital, Dr SM Merchant had never ventured into or even heard of Dharavi. He lived in Dongri in those days and Dharavi was just the outskirts of the bustling city. The sexagenarian doctor, who has now been practising in Dharavi for 40 years, says it was happenstance that led him to what was then a marshy patch of land.

The story goes that a compounder told him of a locum clinic that needed a substitute doctor to fill in the hours. “He said he would show me the place, which was in Dharavi, and asked me to meet him outside the Sion railway station at 4 pm,” recalls Dr Merchant. After hours of waiting, the compounder did not turn up and a miffed Merchant went home. A few days later, he heard of another locum clinic in Dharavi and was asked to “sit around and read” there until the regular doctor returned.

“But I found myself very busy with the patients and I picked up pace from the very first day,” says Dr Merchant. The compounder who had stood him up outside Sion station happened to pass by and burst into the clinic, saying, “You are here! This is the clinic that I wanted to show you that day!” Dr Merchant’s clinical wisdom was a great hit in the area and what was a temporary job became a passion. He went on to open his own private practice near Bismillah Hotel, complete with a low ceiling and a table fan chained securely to a post. For Dr Merchant, Dharavi was his destiny. 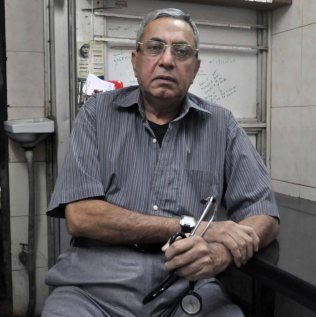 Dr Merchant now works from his dispensary on 90 Feet Road, opposite the Colour Box. It is a narrow room squeezed between a chai shop and an egg distributor. He is unhappy with the number of egg distributors on 90 Feet Road and their business strategy of selling broken eggs for cheap in plastic pouches. Dr Merchant continuously warns his patients – including his compounder, who buy a broken egg or two now and then – of how unhealthy it is to consume these germ-ridden produce.

With four decades of experience in Dharavi, Dr Merchant says that, while people have more buying power, the overall quality of health has declined and people invest in good health only when most required. The most frequent complaints are common colds and fevers, as well as major illnesses like malaria and typhoid. People with tuberculosis used to knock on his doors quite often, but with the intervention of government hospitals and free medicines they have been diverted to larger centres such as Sion Hospital. Dr Merchant says that the number of consultations for cancer has gone up and that diseases like dengue, unheard of some decades ago, are on the rise. “The major reasons for the decline in health would be population, pollution and space. Real estate is so expensive in Dharavi and you will find entire families packed into a 100 sq ft house. Health suffers in such cramped situations,” he observes.

Dr Merchant also points to the endemic problems faced by the Kumbharwada community of potters who live amongst their kilns. Asthma and tuberculosis has been seen in many of them and there are frequent complaints of lung ailments. “I have seen small children use nebulizers here. The government needs to look into these issues and, rather than move them away, needs to consider more tactful means to help the community use its kilns and simultaneously take care of their health.”

At one time Dharavi was infamous for its profusion of illegal country-liquor shops. While the liquor shops have now been pushed into more unmonitored areas, drug use is a major problem, says Dr Merchant. Several teenagers are involved in drug use and drug-related crime, and it is usually their parents who bring them to the clinic. But rehab is an expensive, long-term proposition that most families give up on at a certain a point.

Dr Merchant says that women who come to his clinic are often suffering from a common ailment he calls “male-dominated society.” Some women are pregnant with their fourth child, some are anaemic from fasting, and some cook four times a day for the whole family, but pay no attention to their own nutritional needs.

On most days Dr Merchant has no time to even sit down in his clinic, and says that he often doesn’t tell people where it is. He gives them locations in the vicinity, such as Matunga Labour Camp or Sion, because people tend to raise an eyebrow if he says he works in Dharavi. Nevertheless, clients seek him out from as far away as Virar and Thane. His family lives abroad, but he says he will continue working in his small Dharavi clinic as long as he can. “I cannot imagine a day when I am not working here,” he says, as patients line up outside.

With the recent conclusion of a street art festival in Mumbai, murals and graffiti have appeared in localities across town. While Bandra and parts of Andheri are now hotspots for public street art, one could argue that there can never be too much. We took a closer look at Dharavi to understand the role that street art might play.

With its bustling roads and busy shops, Dharavi is a visual jungle of signboards and advertisements for businesses. Most of these are digitally produced nowadays, but a few maintain the tradition of hand-painted signage. Walk down 90 Feet Road, 60 Feet Road and the inner lanes of Mukund Nagar and Social Nagar and you are bound to spot interesting signs that could be curated as local graphic art. A favourite is Goma, a photography studio on 60 Feet Road, which recently got its hand-painted sign redone. With a fresh coat of glossy yellow, Goma’s sign stands out among the digital-visual noise on the streets. The owner, a digital photographer, says that he loves the natural tones of paint rather than the plastic feel of flex.

Another vibrant signboard belongs to Shriram Medical and General Stores opposite Chota Sion Hospital. It has a painting of the shop’s mascot, Shri Ram, with touches of the Indian tricolour. However, unique among the hand-painted signs in Dharavi are those that advertise the bone-setters, usually replete with diagrams of all the broken bones they can fix. These are unfortunately on the verge of being erased altogether, given the demand for digital prints and the decline of bone-setters. 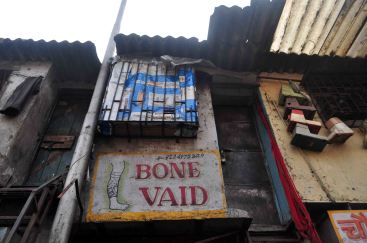 While many commercial signs use street art elements, Dharavi is till starved of “proper” street art. We were therefore pleased to see the international street artists who painted the town using diverse techniques, along with child-trainees from the SlumGods. Works by Tona, Gomez and Seikon can be seen at a community toilet in Kala Killa. Tona’s stencils, Seikon’s geometric designs and the mysterious woman by Gomez drew curious crowds who watched art come alive in a matter of minutes on their toilet walls. The largest facade of the toilet was given to Dharavi children, who were mentored earlier in the morning by Dutch artist Dann at the Colour Box. More works by the street artists on 60 Feet Road are a relief when you’re stuck in traffic.

Ravi Patel, a graphic designer who was co-ordinating the artists, said, “Street art in this city can be massive. Art need not come out only from the galleries. With street art, anybody can have access to art.” Dann added, “Street art here seems to be influenced by things coming from Europe in terms of subjects. There is a rich history of visual communication here and that means a lot of things remain to be discovered. This is just the tip of an iceberg.”

At the Dharavi Biennale we were able to seek out resident sign-painters to make a series of portraits called the Dharavi Healers. With their bold colours and raw appeal, these paintings are in signature styles reminiscent of the vivid Bollywood posters of the 1980s. The series-in-the-making will finally feature the works of five artists, all based in Dharavi and keeping the tradition alive.

One of them, Niren Savaniya, works out of his studio in Navrang Compound and paints for a living. The studio is a low- ceilinged room with one tube-light above a steep set of stairs that cross a couple of sweatshops. Despite the circumstances, Niren is a busy artist and paint splatters on the floor are testimony to his work. He is self-taught and shows us his latest creations commissioned by a catering company. He has already painted a mural for the Dharavi Biennale with the Priya Shakti campaign, curated by Ram Devineni, which shows a heroine seated on a grand, intimidating tiger. On drawing days the public had been sceptical about his work, but Niren says that now the community takes good care of it. “Recently, five of the people who live near that mural in Kumbharwada came to me and pointed out that some vandals have destroyed the heroine’s eyes. I re-touched her eyes and she looks perfect again,” he says. 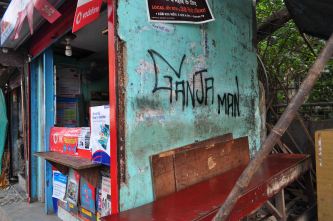 Without doubt, there is a lot of potential for street art in Dharavi. Niren believes that only if you give people good public art can you expect a culture of protecting and preserving it. Unlike the well-to-do parts of Mumbai, where we have heard that residents are a tad reluctant to let their pretty walls be used for street art, most people in Dharavi are welcoming. In fact, street art here can be used to improve urban structures, adding colour, beauty and meaning to a wall. The number of urban issues that plague people might find an easy outlet through anti-establishment graffiti, but a Banksy is yet to be born in Dharavi.

An art for health festival, right here in Dharavi!